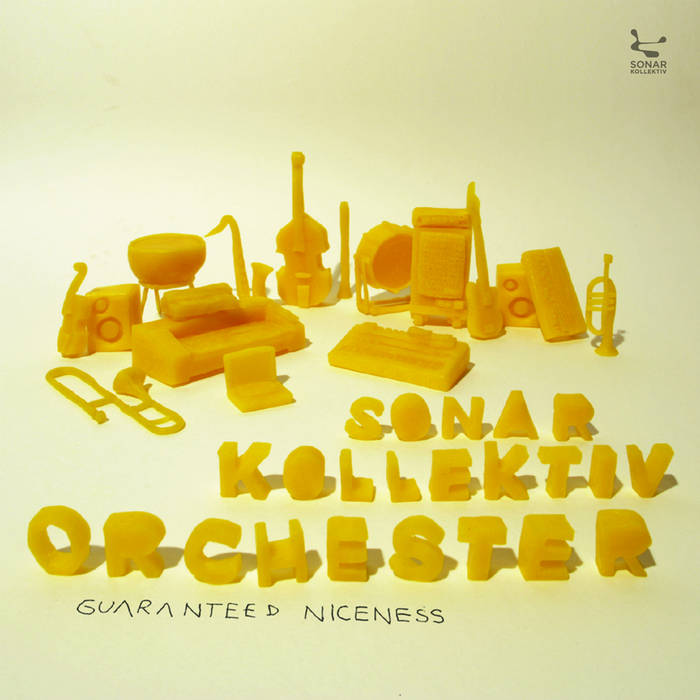 JAZZANOVA's Sonar Kollektiv label celebrated its 10th anniversary in 2007. They took the occasion to form the Sonarkollektiv ORCHESTER - a Sonar Kollektiv super-group made up of label artists and friends. This fifteen musician strong ensemble is almost a big band and so truly earns the name “Orchester” (Orchestra). The complete instrumentation is 3 vocals, 4 strings, 3 horns and a full rhythm section.
The orchestra is led by the extremely capable VOLKER MEITZ who has worked with JAZZANOVA, CLARA HILL, PAT APPLETON (singer of DEPHAZZ), PHONIQUE, PATRICK MAJER (producer of WIR SIND HELDEN and ROSENSTOLZ) amongst many others. With numerous releases with his own project MEITZ and countless gigs all over the world, VOLKER is impeccably qualified for the job as musical director of the SK ORCHESTER. He's also responsible for all the arrangements and plays keyboards in the live set-up. Volker is joined in the SKO by highly skilled musicians of mostly classical and jazz education, each at the pinnacle of their creative powers. Five of today’s finest singers make up the bands core vocal presence. These are ESTHER COWENS, WILSON MICHAELS, GEORG LEVIN, LISA BASSENGE, SASCHA GOTTSCHALK and CLARA HILL. ESTHER COWENS is already known for her own project GREENISSIMO and on top of that has also sung for MEITZ, SAM RAGGA BAND and JAN DELAY. WILSON MICHAELS has most recently appeared as the lead role in Lion King the musical, while CLARA HILL needs no introduction; she is a mainstay of the Sonar Kollektiv scene. An essential member of the SK family, she released her own new album Folkwaves on the label last year (SK161CD). GEORG LEVIN has released a solo album on Sonar Kollektiv and has released a brand new album as WAHOO (w/ DIXON) on Four Music. SASCHA GOTTSCHALK is the singer an songwriter of THIEF (together with JAZZANOVAs STEFAN LEISERING an AXEL REINEMER). LISA BASSENGE was front woman of LISA BASSENGE TRIO and is part of NYLON, A LITTLE LOVING and Sonar Kollektiv’s MICATONE. CAROLINE SIEGERS and ANJA-SUSANN HAMMER from the string section both played on said Clara Hill's Folkwaves album, while their colleague SIBYLLE STROBEL (Violin) has played for the BERLIN PHILHARMONIC, GRÖNEMEYER, NO ANGELS, RONAN KEATING and VIRGINIA JETZT! The SKO also features a full brass/horns sections thanks to the talents of NIKOLAUS NEUSER (trumpet/flügelhorn), DIRK STEGLICH (tenor sax, clarinet, flute) and PETRA KRUMPHUBER (trombone, euphonium). Guitars are supplied by KALLE KALIMA who has played for JIMI TENOR as well as JAZZANOVA, GEORG LEVIN and THIEF, with PAUL KLEBER from Sonar Kollektiv recording artists and MICATONE takes care of the bass grooves. And last but by no means least RAINER WINCH and PHILIPP KULLEN make up the rhythm section on drum-kit and percussion respectively. They have both previously done studio work for JAZZANOVA so can be counted on to keep the beats rolling - these guys are the backbone of the SKO. All in all it truly is a star studded line-up of only the most highly skilled musicians around. With a team of musicians like this you would expect some pretty impressive results, and the SKO sound is indeed nothing less than exceptional.

SKO's repertoire is a cross selection of tunes from the SK label back catalogue, the original styles of which cover a wide range from deep house and broken beats to reggae and experimental hip hop. The new arrangements for a 15 piece band, including many acoustic instruments, put the tunes into an orchestral context and provide a brand new listening experience.

L.O.V.E. & You And I is a cover of the JAZZANOVA track which was the opening number on their acclaimed 2002 album In Between (Compost). The SK ORCHESTER rendition starts with gongs, strings and flutes which creates a nice oriental feeling. But that lovely swinging beat quickly comes in to carry you away. The string crescendos are so dreamy and the breaks perfectly syncopated on this instrumental cover of the JAZZANOVA classic. PAUL KLEBER from MICATONE played bass on the original album version of this fine track, so he surely knows what it’s all about. Atlantic by THIEF originally came out on the album Sunchild on SK in 2007 (SK135CD/LP).
Their songs have provided some of the highlights of the popular Secret Love compilation series on Sonar Kollektiv. It’s lovely to hear this original song in the new SKO version.

With afore mentioned PAUL KLEBER on bass, it makes sense that a track from his own MICATONE project also be included on the SKO album. Run first came out as a 12" on No Zession Recordings (SZ4003) in 2000 and was also included on MICATONE's album Nine Songs (SZ4005) the following year. The ensuing medley takes up the hookline of JAZZANOVA’s first club hit Fedimes Flight and closes with a furious percussion solo as heard in their rework for BELLE ET FOU. VOLKER MEITZ also chose to arrange one of band member CLARA HILL's songs, namely Silent Distance, for the SONAR KOLLEKTIV ORCHESTER. This lovely song was also originally a 12" single on Sonar Kollektiv (SK022) and the track has been remixed by I:CUBE. Unsurprisingly, CLARA sings the lead vocals on this number herself but with the SKO behind her, the song really takes on a new lease of life. Midnight Marauders by FAT FREDDYS DROP singer JOE DUKIE was an underground hit for the Best Seven label, Sonar Kollektiv's dub-reggae sub-label run by JAZZANOVA booker DANIEL BEST and can be heard here in a new SKO version. SONAR KOLLEKTIV ORCHESTER have even reinterpreted AME's dance-floor hit Rej, bringing a soulfully jazzy twist to this deep house classic which earned enormous praise throughout the DJ community when it was released on Innervisions in 2005. Held Him First was a 12" by DEYAMPERT in 2003 (SK015). The original was produced and mixed by EXTENDED SPIRIT (aka JAZZANOVA members STEFAN LEISERING and AXEL REINEMER) and even featured SKO members KALLE KALIMA and PAUL KLEBER on guitar and double-bass respectively, so the tune was also a natural choice for SKO to do and ESTHER COWENS has added her beautiful vocal performance on it. As well as L.O.V.E. & You And I, other JAZZANOVA compositions that have been reconstructed by the SKO big band for their debut album include No Use, and Boom Clicky Boom Klack. The tune No Use also first appeared on their album In Between (Jazzanova Compost Records, JCR 027-2). CLARA HILL once again takes the mic on this number giving it that special vocal delivery that only she can, followed by yet another track from the same album, Another New Day, in medley. After that, we have the SKO version of Boom Clicky Boom Klack (SK094), which is a perfect blend of both the MR. SCRUFF remix flavour and the original JAZZANOVA arrangement.
The original version of Africa was released in 2002 by MEITZ himself (12" on Airdrops). The SKO version is a funky jazzy number with a wonderful afro feeling throughout, driven on with PHILIPP KULLEN thumping the congas as only he can. This fantastic album draws to a close with an outro in the form of SKOs version of How To Find Royal Jelly by THE LOST SCROLLS OF HAMARIC - a delicious tune that was released in 2001 as a 7" single on Best Seven (SB7004). It, like the rest of the album, has a gloriously warm and funky sound. The arrangement throughout have a genuine lounge feel with a tight horns section, lush strings, fender rhodes and true-soul vocals. It’s a super hi-fi production thanks to VOLKER MEITZ who worked with the band as producer on the whole SK ORCHESTER project. This is heartfelt music for movin' on and dancing your blues away.

This hotly anticipated full length SK ORCHESTER album (SK170CD/illicity) more than lives up to expectations. Such a creative new collaborative project from some of Sonar Kollektiv's finest really is a must have for fans of the label and the vibrant scene of musicians that has grown up around it since being founded by JAZZANOVA over ten years ago. SKO is a truly special and original project as it is not just another "best of" or retrospective, but at the same time still manages to celebrate the wealth of great music that is the Sonar Kollektiv back catalogue by reworking previously released tunes in the context of an orchestra. As anyone who witnessed their live premiere at the Sonar Kollektiv Festival in TAPE CLUB, Berlin during POPKOMM last year will know, the SONAR KOLLEKTIV ORCHESTER sounds just as fresh live on stage as they do on record. So here's hoping there will be a full tour to accompany the release of the album.