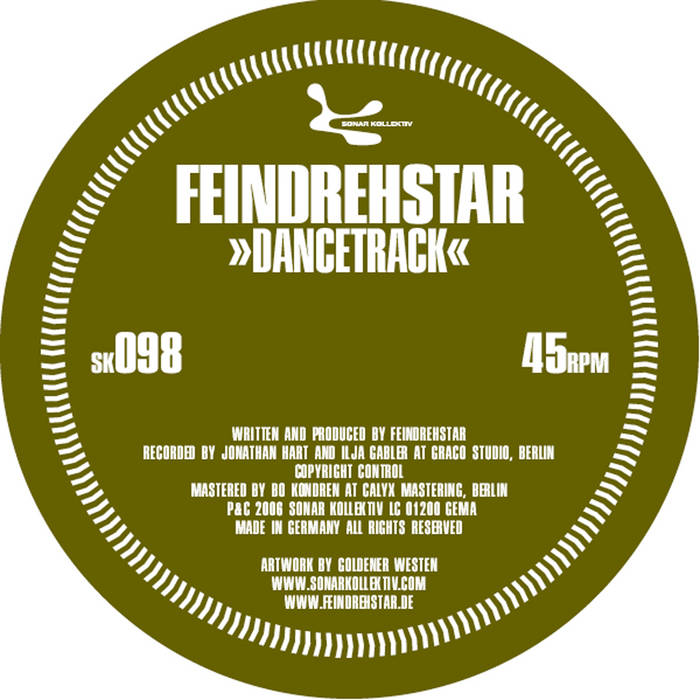 Sonar Kollektiv have done it again. Their latest 12" release Dancetrack (SK098) by FEINDREHSTAR is a fresh mix of funky jazz and soul groove. MOONSTAR, who has had tracks on Compost, Ninja Tunes and CARL CRAIG's Planet E records, provides a sensational mix on the B-side giving the tune something of an electro feel. All in all the record is sure to do exactly what the title suggest, that is, get people dancing.

FEINDREHSTAR are an 8 piece live band from Jena, Germany, complete with brass section and scratching. Their work is a fusion of nu-jazz and hip-hop. Most striking on their latest DanceTrack is the vocal sample. It's a powerful speech which could have come from the mouth of MARTIN LUTHER KING, on the thought provoking subject "what is a revolution?". The sample really carries an important political message of peace and tolerance: "what you and I need to do is forget our differences...". This voice then gets intermingled with warm horn crescendos and ever so gradually the beat lifts off. The beats are made up of a slow funky groove played with brushes. Just to add some spice to the track, about half way through it breaks into a fiery samba percussion jam which is up there with Brazil's best. The staccato horns and funky bass line bring back the jazzy groove towards the end of the track complete with fender rhodes solo. All in all, this is a monster track.

DanceTrack is presented in a brilliant MOONSTARR remix on the B-side of this kicking 12". KEVIN MOON aka MOONSTARR, is a seasoned dj and music producer for over 10 years, who strives to push the boundaries of electronic music by defying categories and genres. Citing influences such as UNDERGROUND RESISTANCE (Detroit Techno), DJ PREMIER (Hip Hop) and BADEN POWELL (Brazillian Bossa), MOONSTARR's sound keeps evolving and expanding while he rocks parties across the planet. A MOONSTARR Dub-Version Remix of DanceTrack already appeared on MOONSTAR's remix album (PTRCD007) on Public Transit Recordings from Toronto, Canada. And MOONSTAR has already had one 12" release of his own on Sonar Kollektive: Detroit B/W Slacker (SK037).
When the song breaks into electro jazz funk you know you're onto a winner. Punchy beats and quirky synth sounds give this a futuristic vibe. MOONSTARR's attitude towards remixing is simple: "It's kinda like cooking up something in the kitchen", he says. "I chop up breaks and add some bass, smooth it over with some pads and sprinkle some highs over top et voilà gourmet beats." So it's no suprise his DanceTrack has such flavour! The beats are utterly fresh with syncopated snare rhythms. But the proof of the pudding, as they say, is in the eating and MOONSTAR has many satisfied customers including big name DJs like GILLES PETERSON, MR. SCRUFF, RAINER TRÜBY, and DJ SPINNA who have all played out MOON's tunes.

With vocal a sample containing lines such as, "unite on the basis of what we have in common", DanceTrack is a truly conscious vibe and proves what STEVIE WONDER knew all along, that music is "... a language that everybody here can understand". Having previously remixed acts such as JAZZANOVA and ENNIO MORRICONE, MOONSTAR knows a thing or two about the art of remixing. Indeed the MOONSTAR mix makes all the right changes to FEINDREHSTAR's original cut. You can trust Sonar Kollektiv to deliver the goods. They know what they are doing. And with DanceTrack they once again serve up a prime slice of quality vinyl.