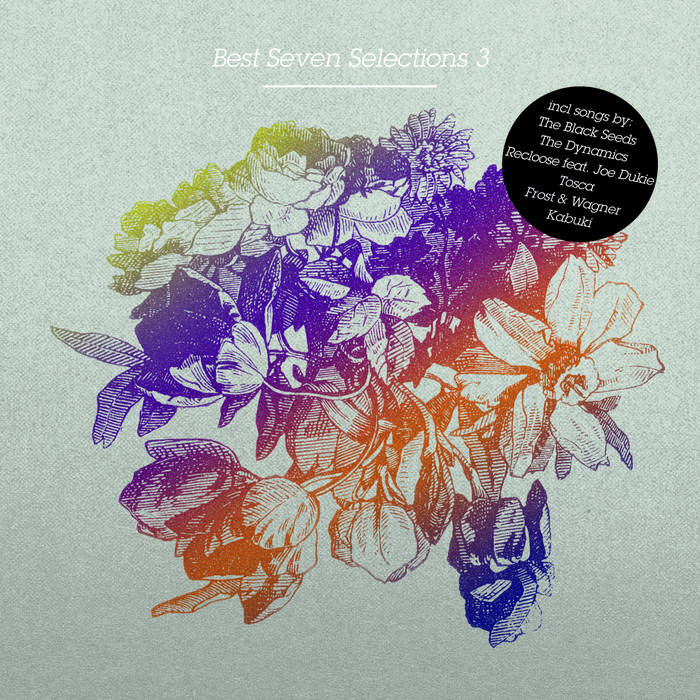 DANIEL W. BEST is Berlin’s godfather of Soul, Dub and Reggae. The long-time partner of JAZZANOVA has come a long way and his taste for soulful dub and reggae music refines itself time after time. After years of passion and hard work DANIEL W. BEST is making it to the top with his small but excellent imprint Best Seven that he established almost ten years ago in 1999. BEST, who brought the legendary band FAT FREDDYS DROP to Europe, who released the 2 latest albums of the other super Reggae band from New-Zealand THE BLACK SEEDS and who helped great artists such as EVA BE, CHAKA DOMU, KABUKI, PAUL ST. HILAIRE and FROST & WAGNER to make a name for themselves on the music scene, is always on his quest to bring us rare dub pearls and forgotten roots-reggae hymns from all over the world. And almost 2 years after the acclaimed second opus of his famous Best Seven Selections, BEST is now coming up with a new compilation of dub and reggae gems and you can believe us at Sonar Kollektiv, when we tell you it was definitely worth your wait! Best Seven Selections 3 is simply the best installment of the series so far.

After the great success of the first two Best Seven Selections (SBCD0005/demroots & SBCD0006/demroots) DANIEL hits the sweet spot with a wicked recollection of tunes fused with dub spirit, soulful vocals and conscious lyrics. BEST extended the spectrum of his selection and presents the music of brilliant and upcoming artists such as SISTERS, LADI 6, JAH SEAL, CAT RAT and THE DYNAMICS as well as works by friends and members of the Best Seven family such as KABUKI, FROST & WAGNER, HAAKSMAN + HAAKSMAN and tracks by famous artists and big names in the dub and reggae scene such as TOSCA, RECLOOSE and JOE DUKIE and THE BLACK SEEDS. Whereas Dub and Reggae constitute the common musical ground of all the artists that are featured on Best Seven Selections 3, this new chapter easily crosses over the traditional boundaries of the genre. Each artist and each band combines roots, reggae and dub with more personal influences and various musical flavours coming from the 4 continents, which makes of Best Seven Selections 3 the reference record for the community of dub, roots and reggae lovers.
Best Seven Selections 3 starts on a feminine note with Play With Fire of SISTERS, the Afro-German soul collective lead by singer ONEJIRU. Known for their activism and their daily fight against violence and discrimination, SISTERS join soul, dub and conscious lyrics to drop a musical statement against all forms of racism. THE ROLLING STONES cover Play With Fire is a great opening, JAGGER’S lyrics emphasize on respect, one of the key values of the roots community. KABUKI follows that footpath with Another You. The Berlin Drum ‘n Bass DJ and producer reveals once again the hidden side of his musical soul for Best Seven with this dubby and soulful number. The next in line is CAT RAT, whose debut EP Freedom (incl JAY HAZE & KABUKI Remixes) has been recently released on Best Seven (SB7025/elektrish). This upcoming producer unveils his skills with Real Rebel longsde Robert Lee that associates great lyrics with roots and reggae sounds in a very fresh minimal dub style. RECLOOSE and Kiwi legend JOE DUKIE are celebrating the release of the new studio album Perfect Timing (SK191CD/ilicity) on Sonar Kollektiv with the wonderful YES KING remix of RECLOOSE’s first single Deeper Waters feat. Joe Dukie (SK192/dem roots) and FROST & WAGNER, who recently released a compilation of their best Remixes on Best Seven (SBCD0009/dem roots), come up with You’re The Best Thing feat. Esther Cowens, a brand-new and original composition that has been especially recorded for the third opus of Best Seven Selections. Then THE BLACK SEEDS enter the game to enlighten our spirits with Love Is A Radiation, which will be the second single taken from their new album Solid Ground released on Best Seven.
The second part of the compilation is a bit more upbeat and combines dub and reggae with many other music influences. New Zealand’s premier female vocalist LADI6 comes on board with Walk Right Up, a powerful dub-roots number, where her wonderful presence shines all the way through. DYNAMICS explores the influence between Jamaican reggae and American Soul with the moody 90% Of Me Is You.
Another surprise of DANIEL BEST’s new compilation is the presence of TOSCA’s brand new single Brian Emely which is exclusive on this compilation. The 2 Viennese legends RICHARD DORFMEISTER and RUPERT HUBER of G-Stone Recordings fame will amaze the dub community with this number fusing roots vocals and their inimitable downtempo style. Berlin’s JAH SEAL slows down the tempo even more and relaxes us with the heavyweight Rastafarian excursion Jah Soldier. Finally the brothers HAAKSMAN + HAAKSMAN, known for their remixes of various artists such as GOTAN PROJECT, SHANTEL, TOSCA, MUNK and BOBAN MARKO ORKESTAR amongst others and for running the great label MAN Recordings that makes us discover the rhythms and sounds of Brazilian favelas, conclude this exquise roots travel with Na Lathina that couples dub infusions with Latino and Brazilian spices. In 12 titles DANIEL W. BEST proves us that dub-reggae is a globalised music genre that builds upon the past to look towards the future. With Best Seven Selections 3 the future sound of dub and reggae is already in your ears!